So you may have noticed that the ENTIRE Laser Red team were out of the office last Monday, for a day of intense team building at Wild Woodcraft in Langworth. We are already a close-knit bunch, but we like to do extra activities to keep us engaged, encourage communication and build positive relationships. After all, a happy team means a higher quality of work!

It was also the perfect opportunity to throw our 2 new family members right in at the deep end. Well, only John P – Danny was slacking, away on holiday already! It’s ok though, we have an even better initiation planned for when he gets back.

The day began with what seemed like a very lengthy trek into the wilderness. I think we were all convinced that we were just about to become the bait in an intense horror scene! After a good 15 minute walk with us all in very high spirits, we arrived at ‘camp’, which was just glorious. There was a massive tepee placed in the middle of a woody opening, with the biggest open fire I have ever witnessed. 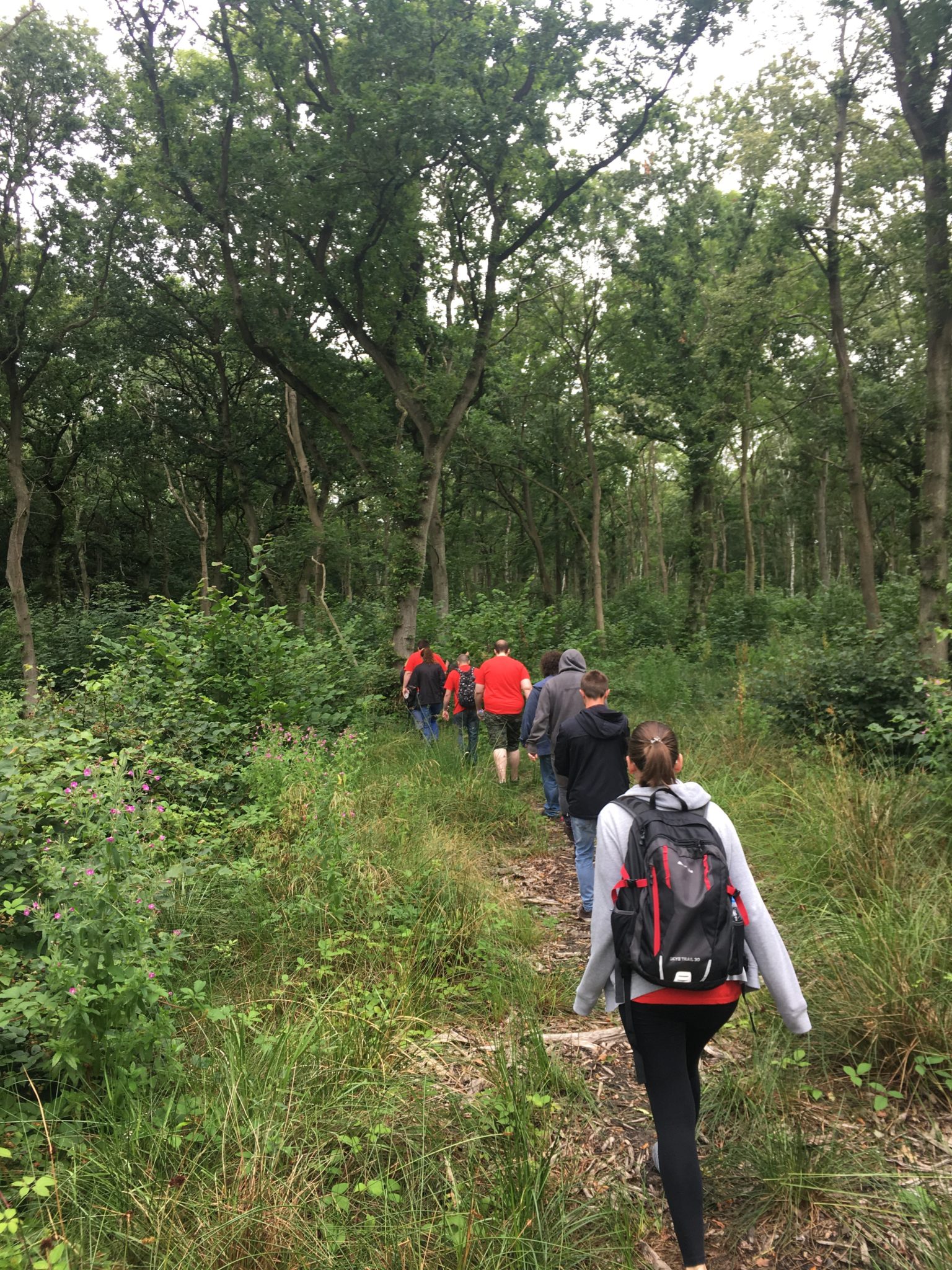 We all sat around the open fire on logs, like a group of excited but apprehensive school children! Maria and Matthew welcomed us into the woods with open arms, and made us feel right at home – they even cooked us bacon butties with tea and coffee for breakfast.

The fun started with a game of Eagle, which is like an adults version of hide-and-seek, and we all got extremely hooked on it. We ended up playing 5 games in total throughout the day! Let me explain.

So, the basics of the game is that there is one person named Eagle, and they have to initially count to 40 (with their eyes shut) whilst the rest of the team hide in the woods. Once they have counted down, the Eagle has to try and find where people are hiding, whilst staying in the Eagle nest.

Some of the team cleverly wore hoodies before the game started – as you can imagine the red t-shirts stood out like a sore thumb in all that greenery! 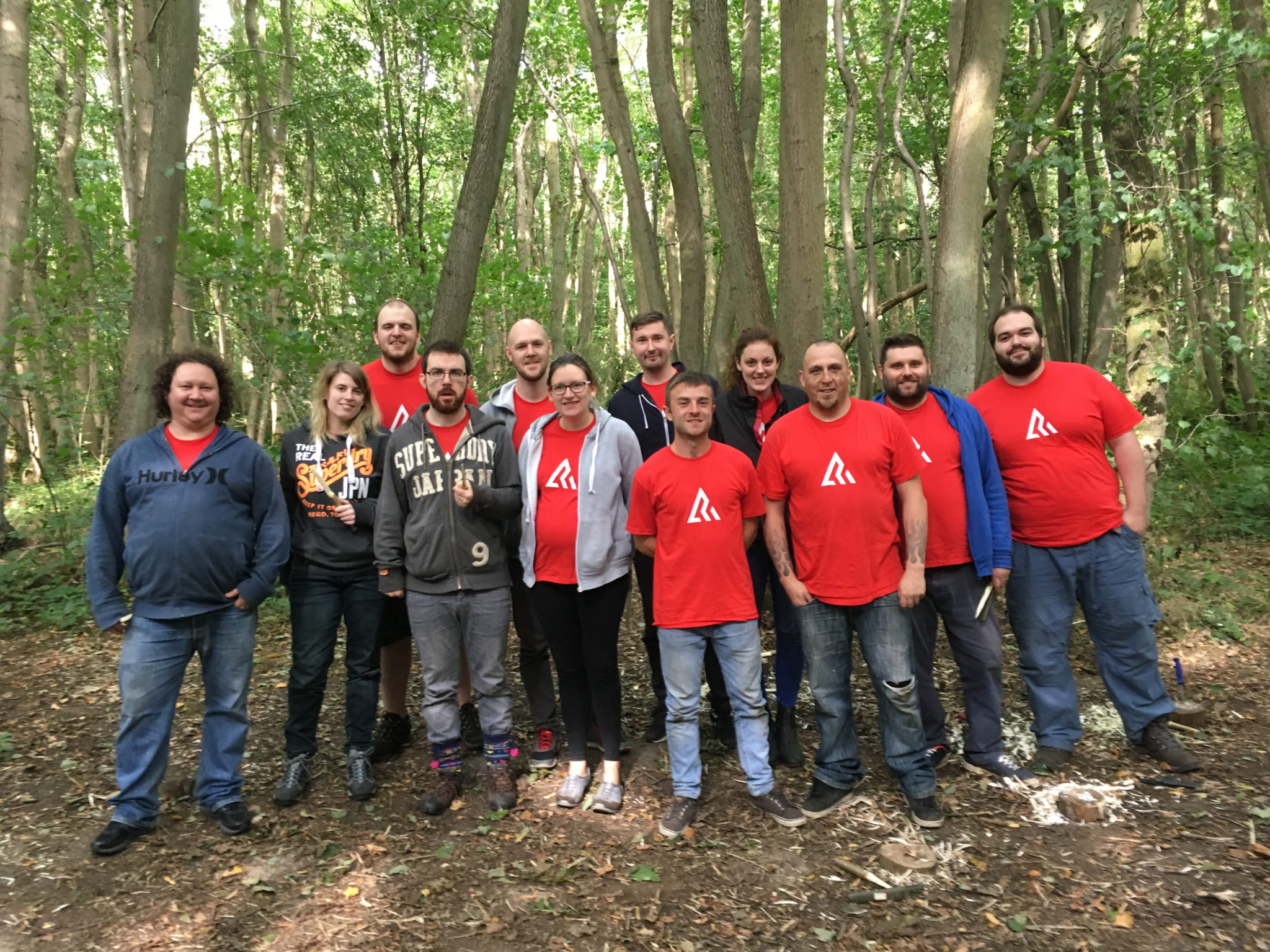 Once the Eagle had found as many of the team that they could, they had to shut their eyes and count to 30 this time. However, the Eagle had the advantage of the eyes of the people who had been found in the previous round. The ‘hiders’ then had to move closer to the Eagle’s nest, and hide again. This carried on until the 10 second countdown. By that time, there was were only a couple of people left hiding. The winner was the last person to be found; who then became Eagle for the next round.

I think it is safe to say we all got extremely competitive, several of us came out with splinters, grazes and there were some spectacular dives into the undergrowth that took place. Unfortunately we didn’t manage to get photographic evidence, but the cuts and bruises confirm this!

Not for the faint hearted

Next up, after a quick tea break was lunch preparation. If you are squeamish, I would definitely advise looking away now!

We all wandered over to another section within the woods, where we were confronted with a muntjac deer hanging on a thick branch, tied up with string. It was already dead when we got to it though, much to Tom’s disappointment. I think he was really up for immersing himself in the complete wilderness experience and catching our kill too!

Once we were given a quick demonstration, the team got stuck into skinning the deer with flint stones. They are surprisingly sharp – a couple of us managed to slice our own fingers in the process. 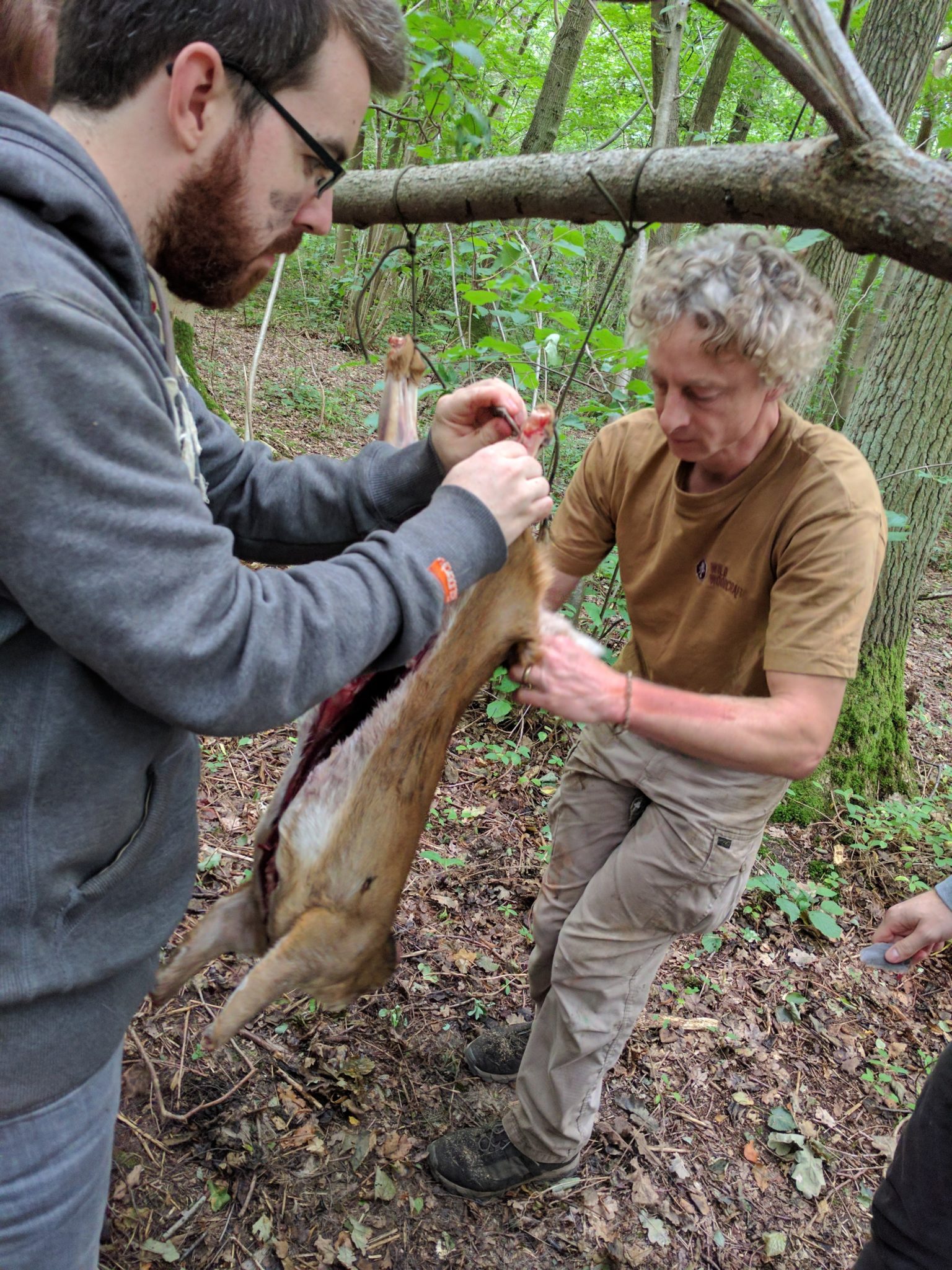 There was also a pheasant hanging around behind the scenes which we plucked, ready to cook for lunch. Matt seemed to particularly enjoy himself – someone got very carried away plucking! 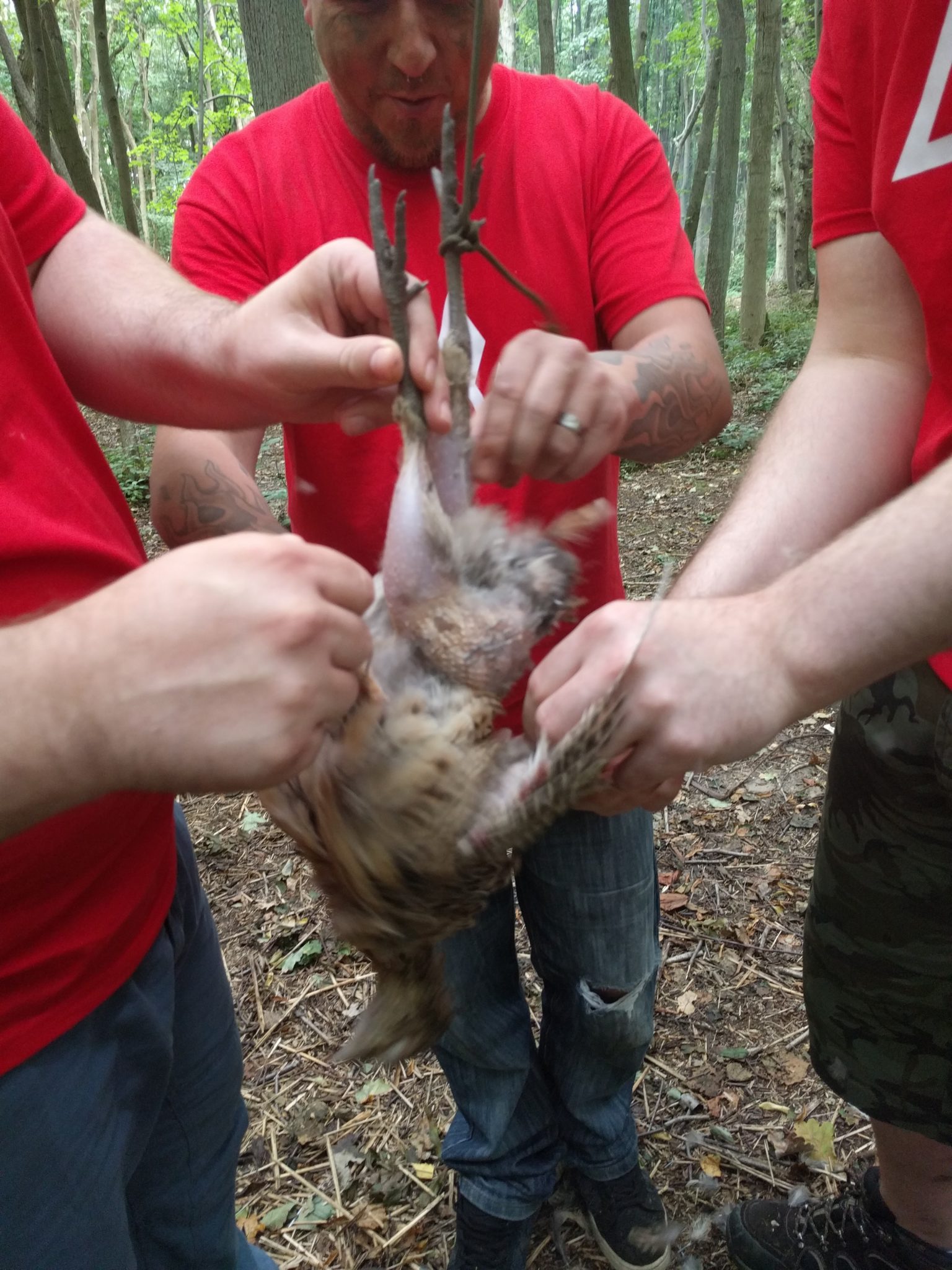 Whilst lunch was cooking over the big open fire in the tepee, we were tasked with the challenge of lighting our very own fires. By hand. There was no cheating involved, and no lighter in sight. 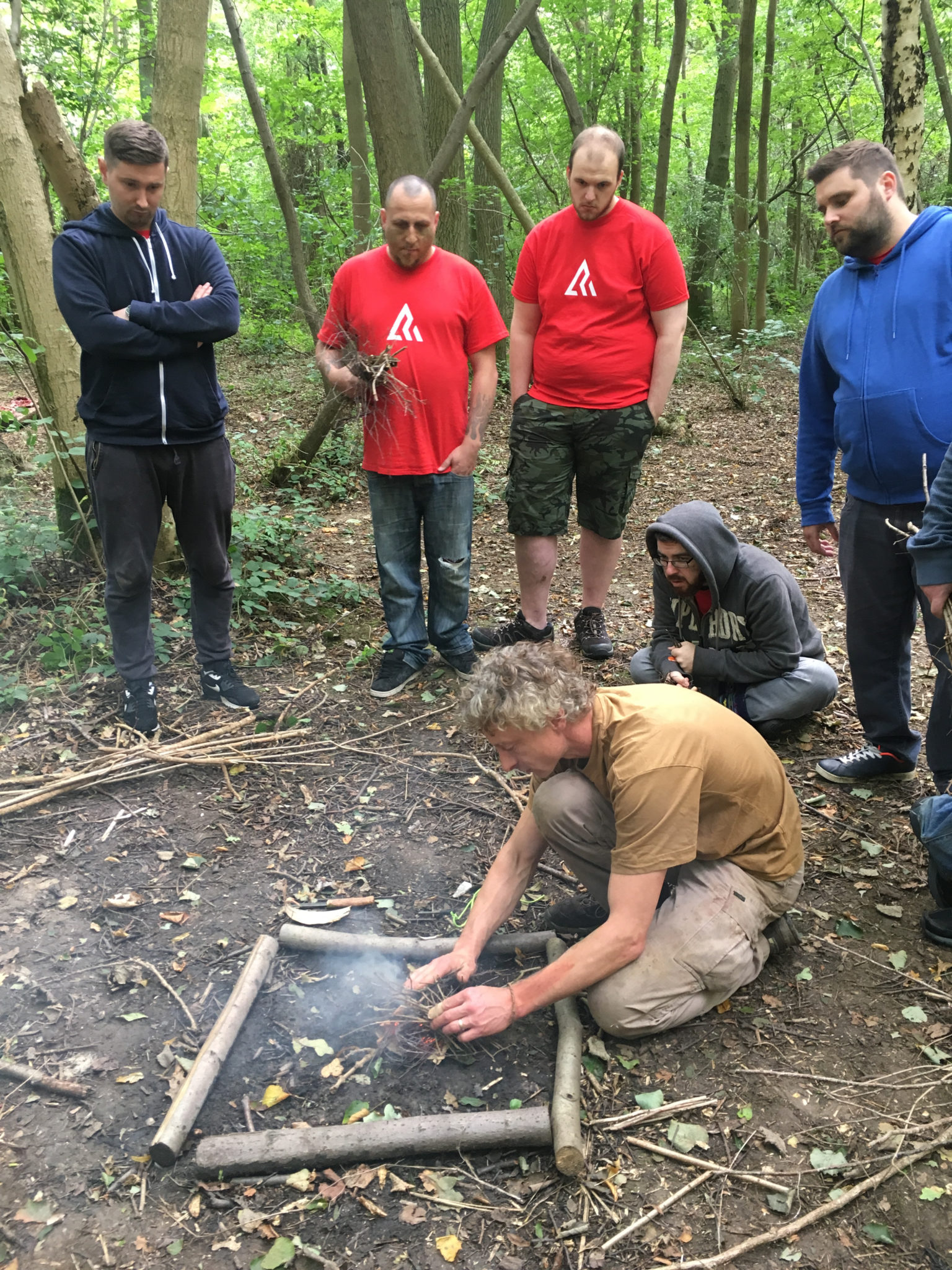 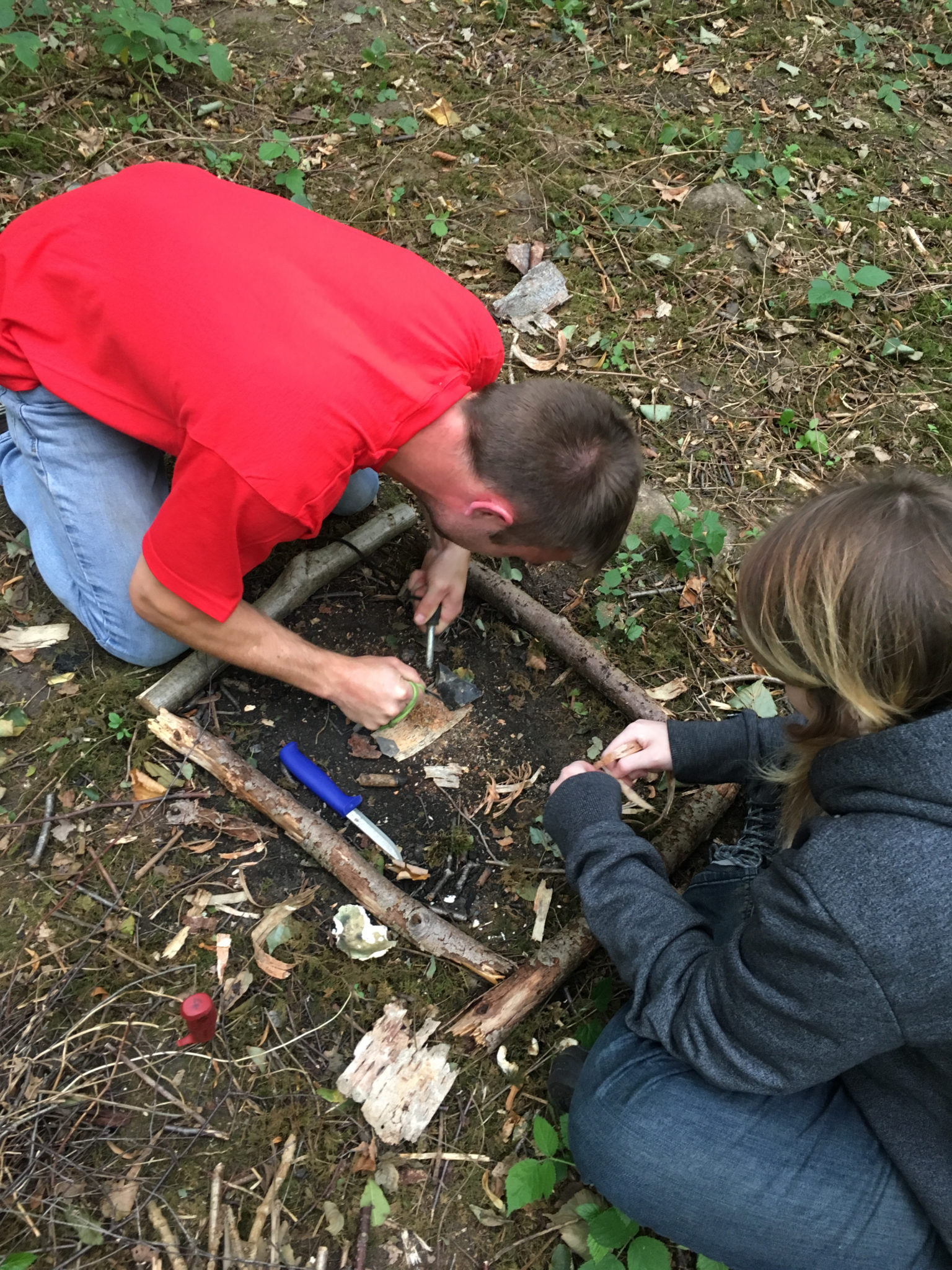 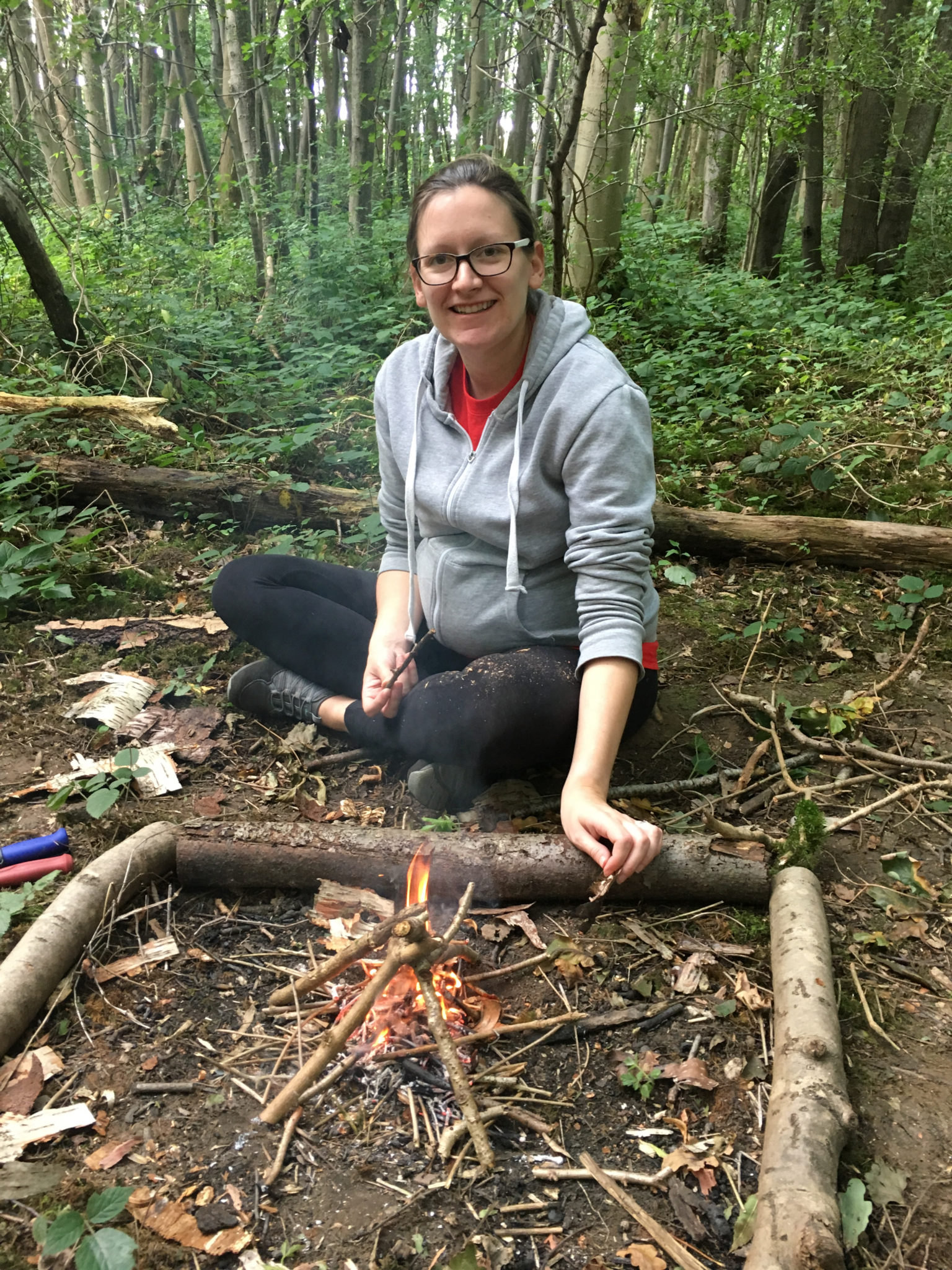 This was a bigger challenge than most of us thought. Have you ever tried to light a fire with just birch wood shavings, a piece of flint and a sparker? Trust me when I say that it was not an easy task. The most annoying thing was that after I managed to light the fire (which must have taken a good 20 minutes), it went out after about 5 minutes! Cue another hour or so while I tried to re-light it. I was not going to be defeated!

After we had tasted the scrummy venison and pheasant that we had prepared, we then moved onto whittling. Which was a completely new concept for me. Essentially, whittling is creating shapes out of wood, using only a knife. It is definitely an art, one which I do not possess! 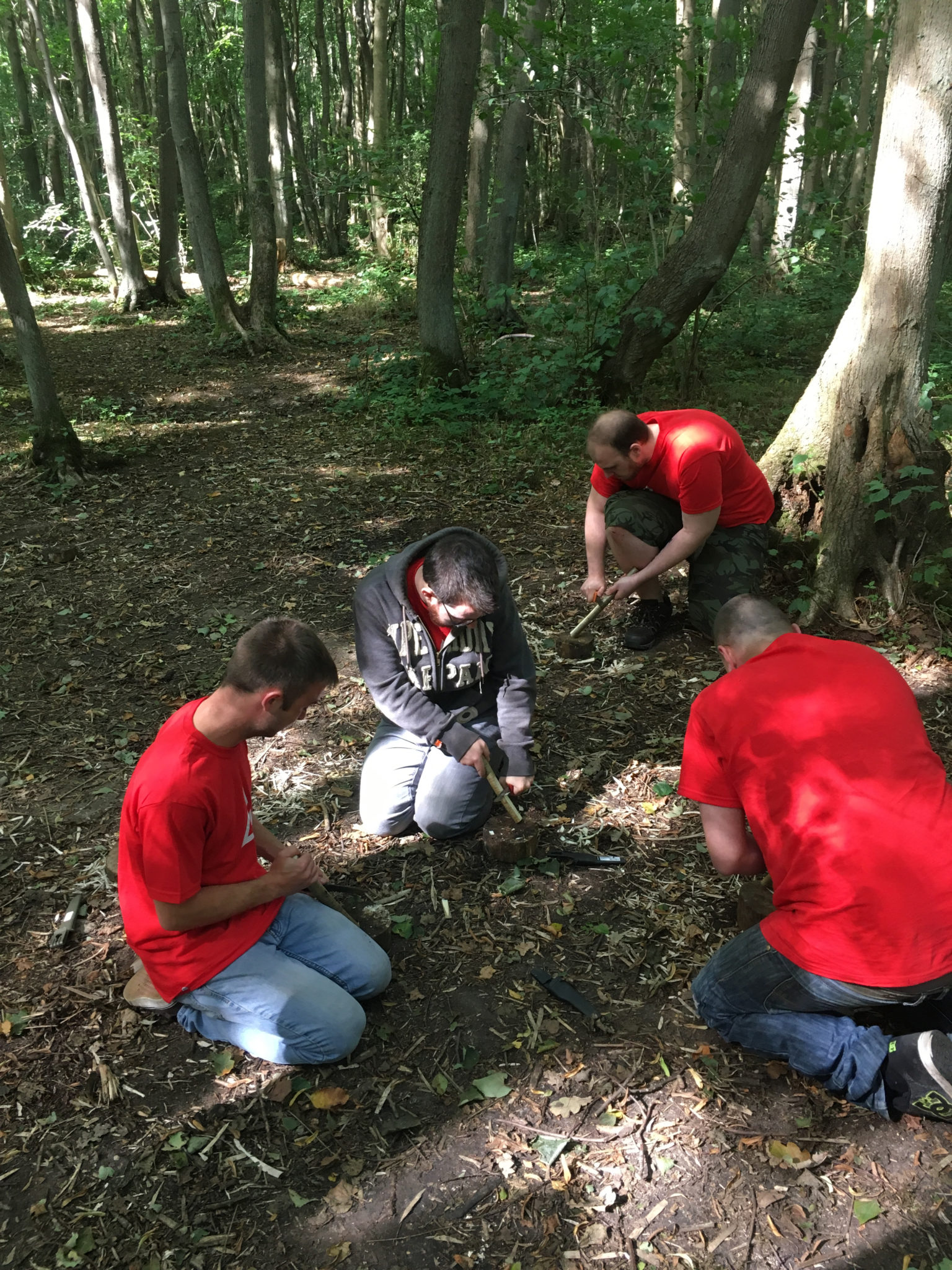 To be honest, there were some very ‘abstract’ creations across the board. A couple of us created what looked like blunt butter knives, some created some lethal-looking weapons, and others took a more delicate approach and fully decorated their knife handle. Tomasz’ knife looked more like a sculpture by the time he had finished with it!

The day ended with a final game (or two) of Eagle, of course it had to! We were extremely exhausted though, after being out in the fresh air all day (which is definitely not something we are used to!). All in all, we had a fantastic time and learnt some great survival skills which will definitely come in handy at some point I am sure. Although don’t rely on me to start a fire if you are freezing to death. We could be there a while! 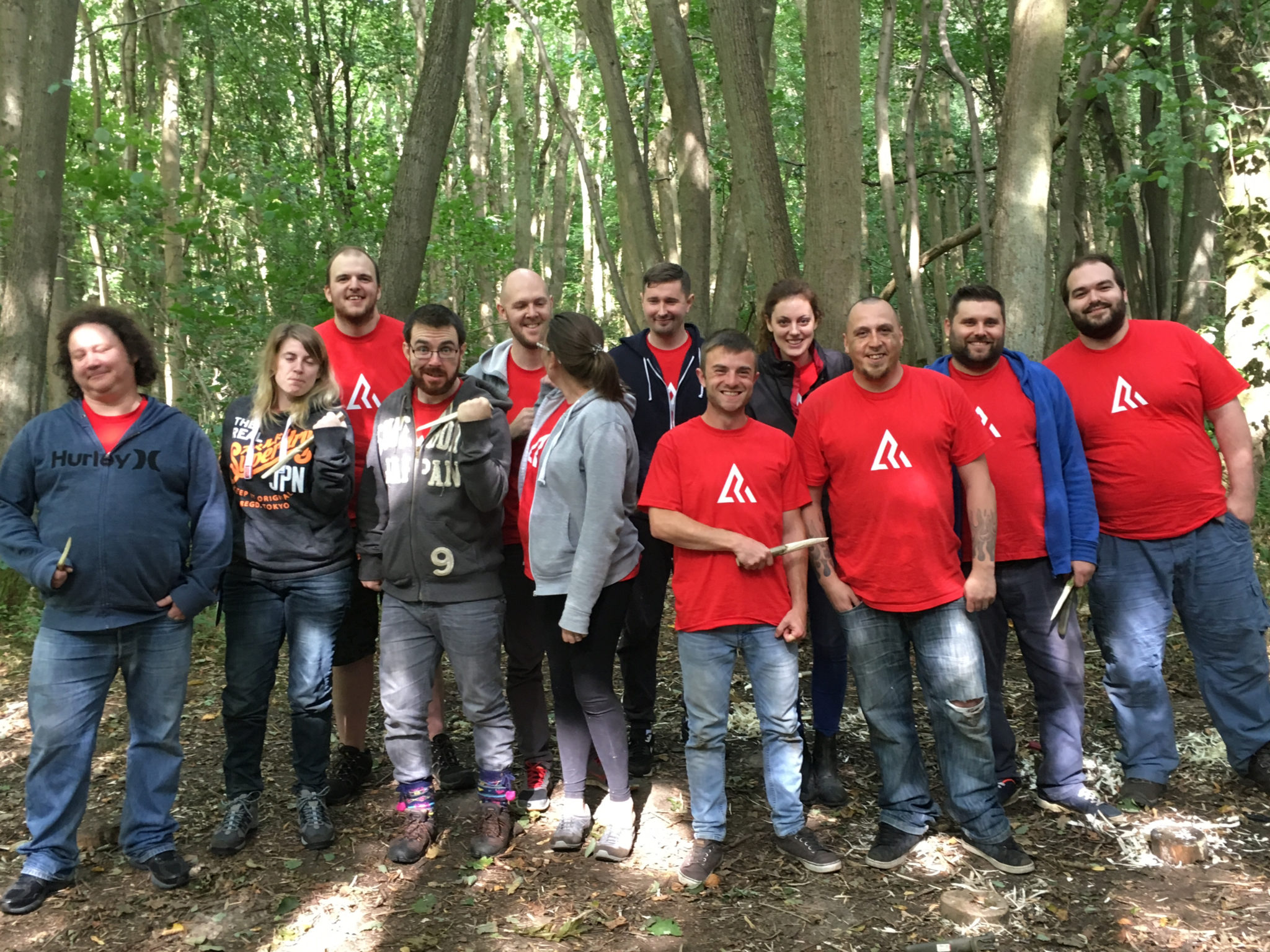 A huge thank you to Maria and Matthew for putting on such an excellent day for us, I am sure we will be back in the near future. Overnight wilderness camping anyone?!